Cooking in the outback

In mid June I spent a gloriously cold, dusty and relaxing week camping with Karen and a group of friends (6 adults and 4 children) at the Flinders Rangers in outback South Australia. 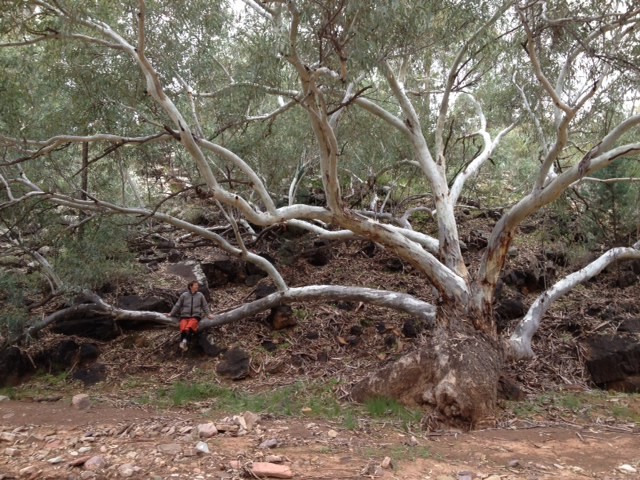 After the initial shock of below zero night temperatures, we settled into our litttle (well quite big actually, there were 3 fridges filled with food) camp. Apart from the bush walks, the drives and visits to small outback towns, one of the main pass times was the preparation and eating of 'camping' food. After a pre-camping meeting, numerous phone calls and lots of texts, Joanne came up with a three section spread sheet! One was the menu, one the list of ingredients and the other a break up of who was bringing what. Karen and I were charged with sourcing the fresh produce and the suckling pig.

The suckling pig was easy. Annie Smithers (who I work for) was kind enough to provide us with a hind quarter of the week's suckling pig and all that was left was the fruit & veg. Driving from Melbourne to South Australia meant we could not take our fruit & veg with us as we passed through fruit fly quarantine areas. The closest place to shop was the Barossa Valley and given we would be shopping on a Saturday morning - the Barossa Valley Farmers Market it was!

The produce was just fabulous. The bunch of turnips I'm holding were the highlight of the roast vegetables that went with the suckling pig. Roasted in the camp oven over hot coals - it doesn't get much better than that! The roast meal was eaten before I had the chance to take a photo...

One thing I had a lot of fun (and help from my young friends Zoe and Leo) making, was bread. Wow, crusty hot bread cooked on the fire on a cold night with a bowl of thick fasolada (Greek bean soup) was yet another highlight. The fun of outdoor cooking is that everyone gets involved, from the guys building the fire and getting the fire wood (definately a boy thing!) to everyone pitching in to cook. 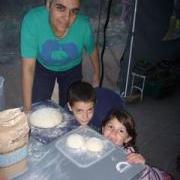 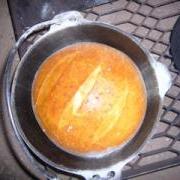 One last culinary highlight worth mentioning was making scones. Armed with Annie's scone recipe on my phone, ingredients, a hot fire and a camp oven, I got to work. The first batch was a bit overcooked, but once I worked out the coal amount needed, the second batch were very well recieved by all! Here are some snaps of the event.

Maybe I could run a cooking with a camp oven cooking class.... now where can I put that fire pit........