Classes have started at angela's kitchen, and it has been a lot fun!

One of the highlights and most popular dishes is Greek style BBQ octopus and the sectret to making it tender.

Here are some of the highlights of the 'Classic Greek' class: 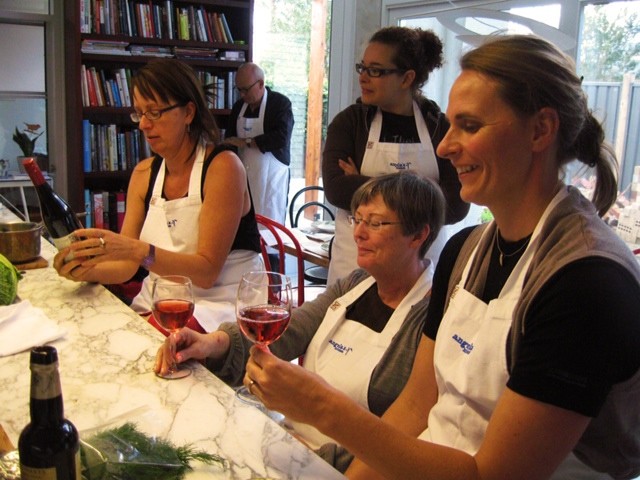 and of course finishing this with a well-earned glass of wine and feast for lunch!

Here's what some of the participants have said about the cooking classes:

"...inspiration continued beyond mere purchasing of ingredients to actually cooking 3 of the dishes within the first week, to much acclaim and appreciation from 3 teenage boys and husband, who were heartily sick of the same old stuff I churn out all the time.  I have also shown them how to do some of the dishes so hopefully they will be equally inspired!  The cooking class that keeps on cooking...."  Juliet (Weeknight dinners class)

"I had a ball thanks, still bragging about my whole snapper." Conor (Seafood class)

Easy to prepare items like the Tsaksiki, the salads, the baklava and especially the moussaka (veggie one) which we thought would be fiddly but wasn't at all.

The power of garnishing, using fresh herbs and oils etc. to boost the flavours in your food

The nosh up at the end.

"You are such a wonderful inspirational teacher!  Your instructions, demonstration and handy hints all combined for a great culinary learning experience. All that we cooked I felt I could do myself with confidence." Lynne (Seafood class)